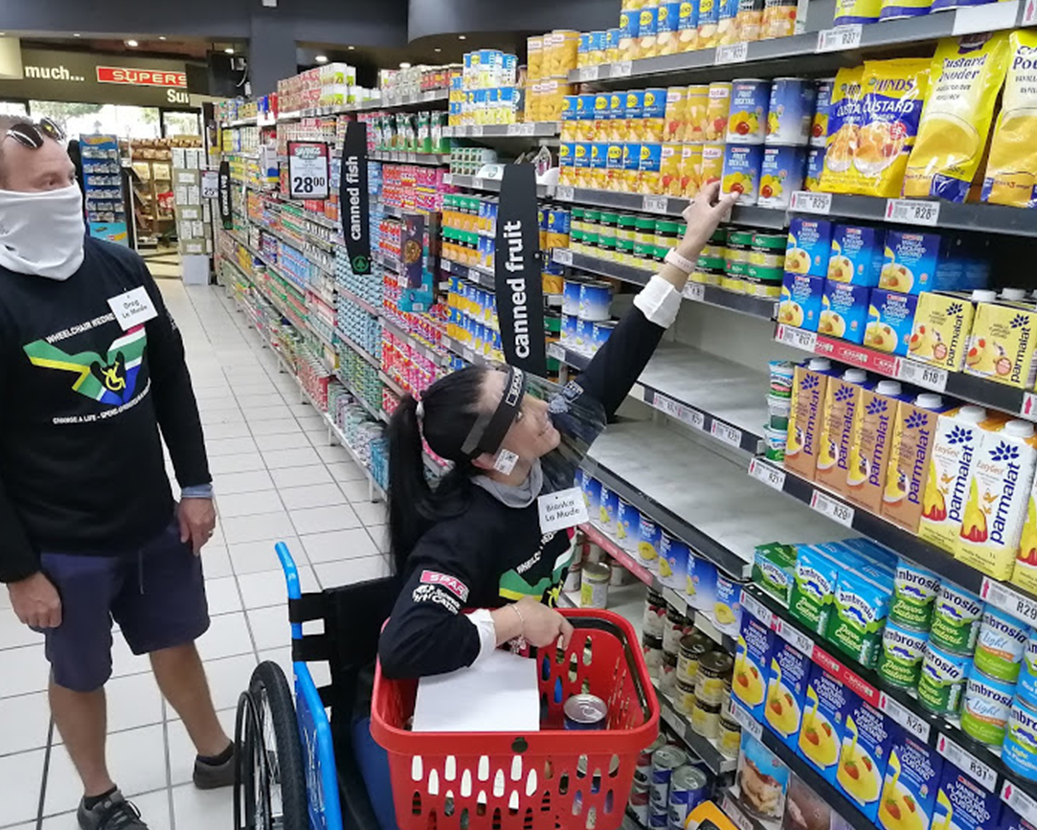 The ninth Wheelchair Wednesday campaign was launched by SPAR Eastern Cape and the Association for Persons with Physical Disabilities (APD) with a special tribute to late president Nelson Mandela in Port Elizabeth on Saturday 18 July 2020.

Local personalities from all walks of life were tasked to spend 67 minutes in a wheelchair to promote the initiative. They were asked to perform various tasks in a prelude to September’s campaign proper.

Campaign to kick off in September

Every Wednesday in September, volunteers from businesses, the municipality and schools will be confined to wheelchairs for four hours to experience the issues those with mobility difficulties confront each day.

The project, which has been delayed by a month due to Covid-19 regulations, raises awareness among businesses as to the need for wheelchair-friendly facilities.

SPAR Eastern Cape sponsorship and events manager Alan Stapleton said the participants’ willingness to experience life in a wheelchair on Saturday would make a difference to others.

“Mandela Day is about celebrating how you as an individual can transform someone else’s life and how you can make a difference to society.”

He said although they were only in the chair for 67 minutes instead of the normal four hours, their view of life would have changed after realising how difficult life in a wheelchair could be.

Providing wheelchairs for persons with disabilities in PE

“It was a special occasion because, through their participation, people in Port Elizabeth will receive wheelchairs. That will allow them much greater freedom, perhaps to start working and to become an integrated member of society.

“By joining us today, know that you have made a difference and that epitomises the meaning of Mandela Day.”

Stapleton said it was heart-warming to be involved in the campaign, which is the brainchild of APD Nelson Mandela Bay.

“We are proud to be part of such a humble group of people, who do an amazing amount of good work for those less fortunate.”

Changing the world with vision and action

“Nelson Mandela said action without vision is only passing time while vision without action is merely daydreaming – but vision with action can change the world.

“Wheelchair Wednesday has reached milestones that are unheard of in this country and we, in this city, have chosen to change the world with vision and action.”

She said there were at least 100 000 people in Nelson Mandela Bay living with disabilities and their target was to hand over a further 200 wheelchairs.

“That means we will have donated 1 200 wheelchairs in the space of nine years, which is a huge achievement when you consider that the waiting period to get a government wheelchair is longer than two years.”

Another aspect of this year’s campaign would be the 80th anniversary celebrations of the APD in Nelson Mandela Bay, she said.

“To commemorate this landmark, we will be giving away 80 pairs of crutches and other mobility assistive devices, sponsored by SPAR.

“It is only with the support of the people here today, as well as SPAR EC and Network of Caring, who donated the wheelchairs, that this campaign can grow from strength to strength.”

Local personalities gave 67 minutes of their time at the official launch of Spar Eastern Cape and APD’s Wheelchair Wednesday campaign, which took place at SUPERSPAR Sunridge in Port Elizabeth on Mandela Day.