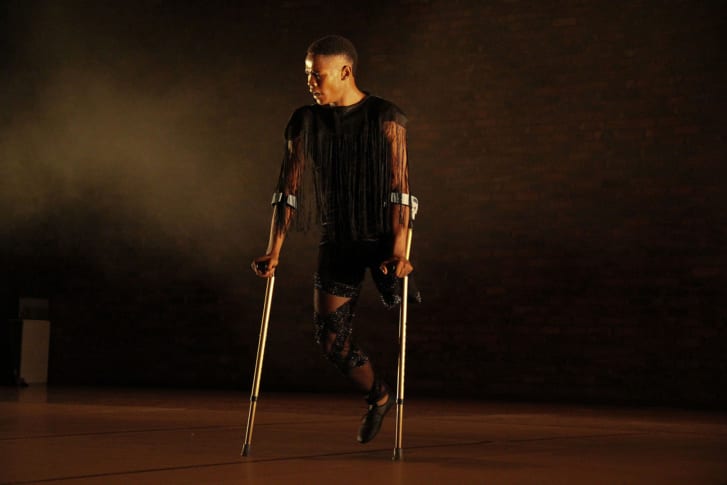 ‘Dance is a purpose’: After losing his leg, South Africa’s Musa Motha is inspiring with every move

Growing up in an underdeveloped zone of Sebokeng, south of Johannesburg, South Africa, Musa Motha says his surroundings weren’t exactly idyllic. But he did have a dusty, make-shift soccer pitch directly across the street from his home. And for Motha, it was “paradise,” he said.That field brings back both good and bad memories for Motha. Soccer was his favorite sport, and he fondly remembers the times he played for the local youth team.But one game, when he was just 10 years old, would change everything.”We were playing (a) tournament and I got injured on my left knee — someone kicked me, and I fell. Ever since that day, I was in pain,” Motha said.He recalled many sleepless nights in agonizing pain. Eventually his mother took him to the local hospital, and from there he’d go to many more. “The doctors assessed my leg and they couldn’t find anything. There were no fractures in it,” he said. “They were frustrated — ‘what is this,’ you know, ‘what’s happening?'”

Eventually a bone marrow biopsy revealed Motha had osteosarcoma, a type of bone cancer, in his left leg. While his soccer injury was not the cause, it did draw attention to the already-present cancer. He said the first round of chemotherapy treatment did not work, and Motha’s doctor informed his parents that they’d need to amputate his leg. “They did not take it well,” Motha remembered, and neither did he. “I’m a little boy, I mean, losing your leg? I’m like nah, it’s not going to happen,” he said. They did not proceed with the amputation, but as time went by, Motha got worse. “I could not even stand up,” he recalled. “So, it was a matter of it’s either amputation or I die. “He chose the amputation and ever since that day, he decided he was going to approach life differently — more positively, he said.

Creating space on the dance floor

True to his word, Motha, now 26, can be seen twirling across stages around the world. He first encountered dance at a neighborhood party, where he mustered the courage to ask a friend to teach him some modified moves. “Tthen I (danced) the whole night,” he recalled.

The next day he joined a street dance team. Every Sunday, they would compete with other teams in an open-air stage in the town center. His talents did not go unnoticed; he began appearing in South African TV ads and shows. He even appeared in Drake’s “One Dance” music video. Photo series shows why African hair braiding is about more than just aesthetics Motha was encouraged to expand his talents to contemporary dance, and in 2018 he auditioned for the Vuyani Dance Theatre, the brainchild of renowned choreographer Gregory Maqoma. This was the first time Motha says he really had to reach outside his comfort zone and create a new mindset around dancing with a disability. “Gregory was like ‘feet first parallel,’ and I’m like ‘I’m not gonna move my leg because I only have one,'” he said. “That’s when I was like okay let’s work on how (I’m going) to do it.”

Nadine Mckenzie, a wheelchair dancer in South Africa, said that access is the biggest barrier for entry into the performing arts.”There are not many companies or training programs that cater for persons with disabilities, especially in the dance field,” McKenzie said. “I’ve had quite a few experiences whereby you’d be in a class with different bodies and some facilitators would not know what to do (with us), and so for those reasons, they don’t open these spaces to different artists.”

Beyond lack of access, McKenzie, who’s been dancing for 15 years, said inclusion is another barrier for people with disabilities. ‘“There are very few people especially in South Africa that actually have projects whereby they involve dancers with disabilities,” she added. “It’s something that’s still very difficult, but it’s slowly — very, very slowly — starting to change. “Seeing a gap in the industry, McKenzie co-founded Unmute in 2013, an inclusive dance company in Cape Town that enlists young South Africans with disabilities to get involved in the arts. “It’s been extremely rewarding in the sense that we’ve been able to create more platforms for artists to train and perform, and also expose more young people,” she said. McKenzie believes Unmute is helping break down some of these barriers through awareness campaigns — not just for people with disabilities to sign up, but also for able-bodied people to learn how to work with them.

Gerard Samuel, a professor of dance at the University of Cape Town, has written extensively on the invisibility of dancers with disabilities. He told CNN that though there has been some progress in both access and inclusion within dance, there is still much work to be done. “Barriers include mindsets of limitation and inability of disabled persons and mythology and taboos that surrounds them,” he said. “All this still need to change. “He believes that education, investment and more representation in the media would help foster more accessibility and inclusivity.

Without having an example he could turn to, Motha struggled with figuring out how to dance in contemporary pieces with two crutches. A lot of it was simply adapting and adjusting, he said.”I finally found the technique of (dropping) one crutch and then using (the other) one as a leg and an arm at the same time,” he added.

He’s also had some help along the way. “We are in a place where we can learn so much from people living with disabilities,” said Gladys Agulhas, a dance instructor who works with people with disabilities, including Motha. “It’s time now that we have to merge and recognize and respect who we are as individuals. It’s everybody’s right to be where they want to be.”

Samuel agrees that representation needs to extend beyond the performing arts. “The more we can see the disabled person in multiple aspects of life, be it as helicopter pilots, engineers, chefs, choreographers and professors … the greater hope we can hold onto for a society where no one is on the margins,” he said.

That’s Motha’s dream as well. Though he told CNN dance gave him “a purpose,” he added “I don’t want to see myself as a dancer only. “He wants to create a space for other people with disabilities to go outside their comfort zone — from soccer to singing. He feels that greater representation will beget greater access and inclusion across the board, paving the way for people with disabilities to shine. “Instead of telling a sob story, I find that the most beautiful stories are after (the amputation),” Motha said. He encourages others with disabilities that they, too, can do anything: “There’s a whole lot of things that you can overcome that actually define how strong you are.”