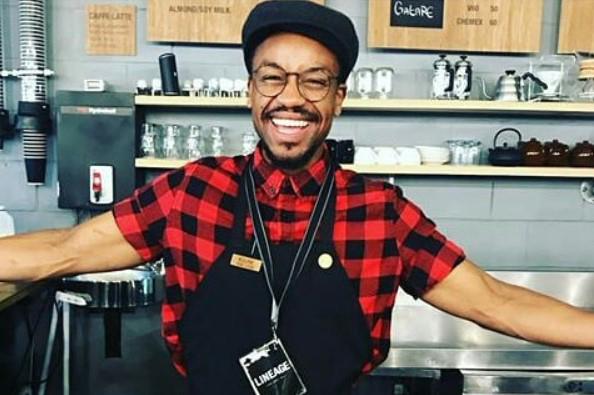 Meet Kagune Dlamini – A master of coffee and sign language

Durban-based barista, Kgune Dlamini, is fluent in sign language, and for the second year in a row, has taken home the Barista of the Year award.

“”The two go hand-in-hand, as his passion for communication skills sees him focusing not only on making a great cup of coffee, but also making his customer’s day that little bit better,” reports the Independent Online (IOL)

Dlamini works at Lineage Coffee in central Hillcrest and told IOL this week that he learnt sign language in 2011 from a former girlfriend who was deaf.

A love for sign language and those who use it

“I went to many deaf parties and events, I just fell in love with the deaf language and culture and I’m passionate about the inclusiveness of people,” he said, adding he also enjoyed the arts and recently hosted a show, Silence : A Love Untold, which enjoyed a full audience, at the coffee shop.

“I wanted to share my story. Coffee is an expression of an art form and taste is a language we all speak.

“We can also use our body as a form of sign language and I wanted to combine these,” said Dlamini.

Born and raised in Durban, he said knowing sign language made him more aware of how people were feeling. Everything I learnt from the deaf community, I have used in my career as a barista and in my art. It has helped me to see my customers, whether their shoulders are down. The eyes are windows and it’s hard to lie in silence.

Improving lives one coffee at a time

“I’m using a cup of coffee to change your day,” he said, emphasising that true sincerity was also vital to communicate with customers. We want to bring something more to the coffee industry and sincerity is important. We want to be more than just a coffee shot, we want to be where people meet up,” he said.

Craig Charity, owner of Lineage Coffee which has three coffee shops in Durban, won his first KZN and SA Barista of the Year titles in 2013 and was placed 15th in the World Championships in Italy – still holding the highest rank for a South African barista.

He said Dlamini’s success as a barista came from “his love for people outweighs his love for coffee“. “The interaction with a person is the end goal and Kgune facilitates that really well,” said Charity.

On Lineage’s Facebook page, Kgune says: What I love most about what I do is the people (Our clients). To me good coffee without people is just that, good coffee. But to have that good coffee experience shared with people, then coffee becomes something else. It becomes an experience and memory so great, it deserves to be called, “forever”.