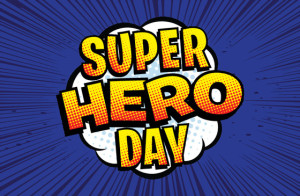 National Superhero Day is observed annually on April 28: Meet the 13 superheroes with disabilities

Comic books can do whatever they please with their characters. Short of a destroyed continuity, comic fans will usually suspend disbelief. So a superhero or supervillain can be superhuman despite being physically disabled. This happens much more often than non-comic fans would suspect. Let’s run down some of the better examples.

The alias of Barbara Gordon, formerly Batgirl, was shot in the spine by the Joker and confined to a wheelchair. After a period of adjustment, she became the Oracle (a computer genius) and directed a female group of operatives called Birds of Prey. She’s very fond of saying, “Don’t let the wheelchair fool you. I can still kick your ass.”

As a teenager, Matt Murdock tried to save a blind man from being run over by a truck. Ironically, the truck carries radioactive waste material that ends up blinding Matt. Since radiation is involved, his other senses take over heightened qualities to superhuman levels. So he can “see” through the sense of touch and smell and develops a sort of radar sense to aid him in his superhero tasks.

Not to be confused with the Marvel character of almost the same name, DC created a crippled newsboy character who was transformed by Shazam into a Marvel who could do all sorts of superhero-y things. Everything but walk, that is. With a simple uttering of “Captain Marvel!” he could be transformed from crippled to able and back again.

Bucky received a huge shot of super serum when he was captured by the Nazis before being rescued by Captain America. Bucky is later believed to be killed in action, but he’s retrieved by the Russians. In the Captain America 2 movie, he became “the fist of Hydra” when his captors gave him a bionic arm.

This member (Eugene Judd) of the Alpha Fight was not born a dwarf but as a near-giant immortal being. A demon transformed him into a dwarf, who had no superhuman powers but did possess the ability to fight. Puck became a member of the Alpha Flight superhero group and a master of attacking through a series of cartwheels.

As the founder of the X-Men mutants, Charles Francis Xavier finds himself wheelchair bound after taking a bullet in the spine. In various parts of the comic, Professor X is able to walk again, only to land back in a wheelchair after another accident. He still retains his telepathic edge, which makes him a formidable foe despite his disability.

Throughout his comic book and movie run, Tony Stark must wear a special electromagnet and ARC reactor as part of his chest plate. He sustained embedded shrapnel during an injury at war, and the reactor keeps the small pieces from entering his heart. He probably could have had this fixed, but his chest piece serves a purpose. If he doesn’t wear it, he’ll die. He was clearly drawn with this weakness in mind.

This character suffers from Meniere’s disease, which is a largely permanent condition that causes enduring vertigo and, in extreme cases, deafness due to inner ear disturbance. He uses hearing aid devices to maintain his balance, but these devices can be easily exploited by his enemies.

When Mark Johnson gave up his alias and took over for his father, he revealed that he recently lost an eye and must wear an eyepatch at all times. However, he removes the patch (for a security scan) in Captain America 2 and reveals that the eye is still there, but it’s simply useless to him.

In the comic books, Thor is banished to Midgard by Odin to learn some humility. Thor is placed into the body of a disabled medical student named Donald Blake. When Blake becomes a doctor, he hooks up with Jane Foster, but he does change back to his Thor persona by tapping his cane in a cave. The cane transformed into Thor’s hammer.

As a child, Echo was mistaken for mentally disabled, but she transferred to a school for musically gifted students. She was able to play the piano (despite her deafness) by memorizing other’s movements on the instrument. She’s a strong fighter and managed to keep her deafness a secret for a very long time.

There’s nothing wrong with Kay Challis in the physical sense, but she suffers from a severe case of multiple personality disorder. She possesses 64 different personas, but Crazy Jane remains the dominant one. She also has a “gene-bomb” that gives each personality a different superpower.

This mutant from the X-Men comics uses his powers to communicate because he is mute (thanks to a natural deformity). he’s able to use his telepathy to mind-lock people and keep them from doing things. The Scarlet Witch stripped Artie of his abilities, but he was able to regain them artificially through a helmet.