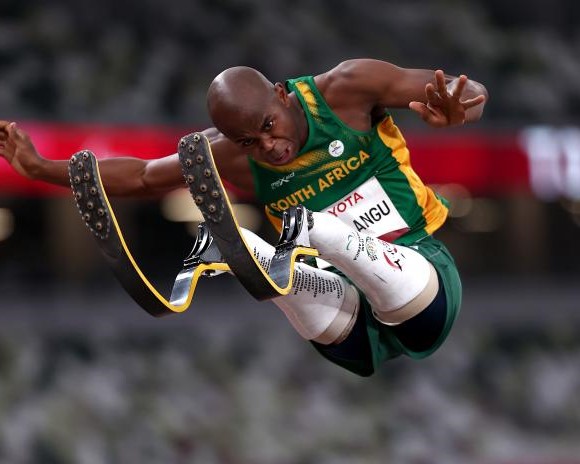 Sprinter Anruné Weyers and paracyclist Pieter du Preez won gold medals, while there was a silver for 1,500m runner Louzanne Coetzee and a bronze for Sheryl James (T37 400m).

Mahlangu picked up a surprising gold in the men’s T63 long jump with a leap of 7.17m and then added the T61 200m title to his already bulging set of accomplishments.

He’s only just turned 19 and is still in his matric year at Afrikaanse Hoër Seunskool (Affies) in Pretoria. He really does have the world at his feet, or in his case, at the end of his blades.

It continued his upward trajectory that was obvious in Rio five years ago when he won a 200m silver as a 14-year-old. He has also clocked an incredible 1:43.31 in the 800m, which would be enough to have made the able-bodied men’s final at the Tokyo Olympics.

There is little doubt that in time there will be calls for the youngster to compete against able-bodied athletes, although that comes with massive scrutiny and debate over the advantages or not of prosthetic limbs.

For now, Mahlangu is top of the pile as a para-athlete and a huge talent in his disciplines. He also showed tremendous temperament on his way to the long-jump gold because it was an event he only recently took up.

“When we chatted about the jump before, we talked about it being ‘a naughty medal’,” Johan Snyders, who designs Mahlangu’s blades, said. “It was never … our [intention] to come to Tokyo and jump because the impact on his body is so much.

“But you also need to occupy the time … in the 200m he is so dominant in that field, we needed him to be challenged, so we approached Neil [Cornelius], who is a very technical long-jump coach and explained to him the kinematics. He and Ntando did the rest.

“We always knew we had an outside chance for a medal but that last jump was … phenomenal.”

In the final against more experienced opponents, Mahlangu was in bronze medal position at the start of the final round of six jumps. He had already gone 55cm past his personal best. It was his moment.

“Before the last jump I checked with my coach,” Mahlangu said after the competition. “He said that I should just stop what I’m doing and jump, but he told me in a straight way. I knew it was now or never. I was calm. I knew … I’d give it my best. I said a prayer, ‘If this is the time, let’s do it … if not, we take the next event.’ I think I was answered.”

End of a journey

Mahlangu is at the beginning of his journey, whereas women’s sprinter Anruné Weyers competed at her last Paralympics. Despite suffering from Covid-19 shortly before the Games, she stunned the world to win the T47 400m gold in 56.05 seconds.

Her gold medal came 14 minutes before Mahlangu’s long-jump gold on a brilliant night for South Africa and its athletes.

Weyers has an infectiously bubbly personality and is a supremely positive influence on all those around her. Her first Paralympic gold was one the entire team embraced.

“I still got goose bumps, though, when Team SA gathered here at the village and took pics,” Weyers said. “Afterwards I felt ‘it ’… the time is now. It felt like when you walk into the athletics stadium and you know it’s time. Now I want to embrace the space, good or bad, and embrace the performances. It’s been quite a road, this five-year cycle.

“I want to give back. I’m someone who likes to communicate, I’m spontaneous and want to speak to people, get to know people. I’m not sure where things will lead after my career is over, whether it’s full-time teaching or if God has a different path. But I need to start building a future with my husband, buy a house, and start the next step.”

Du Preez’s gold in the H1 paracycling time trial was another popular win for the team. The 16km race on the famed Fuji speedway circuit saw “Supa Piet” emerge as a star in his own right despite an impressive CV before the Games.

Van Dyk finished fifth in the H5 road race over 79.2km, but wouldn’t rule out another tilt at the Paralympics, even though he will be 51 in 2024.

His list of achievements is jaw-dropping. He’s a 10-time winner of the Boston Marathon, twice a New York City Marathon winner and two-time Los Angeles Marathon winner. He is also a two-time world champion and two-time Paralympic gold medallist, and came to the Tokyo 2020 Paralympics as the defending champion from Rio 2016.

“I said that it was my last [Paralympics] after Rio and here we sit again today,” Van Dyk said.

“It’s going to become harder and harder … to compete at this level if you’re not a full-time professional athlete, especially in the classes where we have a lot of depth and competition.

“To work full-time and to try to balance that recovery, intensity and the rest of life will become very difficult for older athletes in the future. So, while I like being fit and I love competing, we will just have to see how I can fit things in with my professional life.”

Team SA’s Paralympians, though, won much more than medals. They won hearts and minds with their tenacity and spirit.

There are athletes such as table-tennis player Theo Cogill, whose life changed when trying to break up a fight and was stabbed in the neck and back, leaving him with disabilities.

As a promising athlete and able-bodied table-tennis player he had to readjust his goals and emerged as a Paralympian at Tokyo 2020. Life is challenging for the 34-year-old from Bonteheuwel, but his passion and spirit won’t be dimmed.

“I can’t move so fast and the body doesn’t do what I want it to do. I still struggle with aches and pains and niggles, but I have to stay positive,” Cogill said.

“We’re not on programmes like the sports professionals are, we don’t have physios, so we have to help ourselves. In a way, though, I suppose I am a community leader, so there [are] a lot of people looking up to me as a positive role model.”

Similarly, swimmer Kat Swanepoel juggles life as an occupational health therapist and athlete with debilitating multiple sclerosis. Life is not easy, but she keeps fighting, working and competing, and finished fourth in her final.

Team SA’s Paralympians have won medals and made finals. Those achievements are etched in the record books forever. But more importantly, they have shown resilience, determination and grace to overcome seemingly insurmountable odds to earn the right to forever be called a Paralympian.