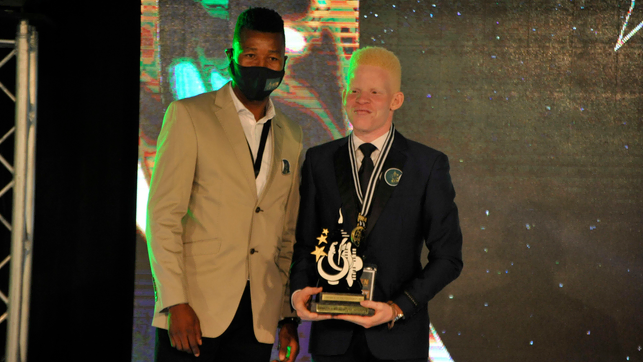 A visually impaired surfer, Sabelo Ngema, 22, made the splash of a lifetime when he scooped the award for Sportsman of the Year With a Disability at the KwaZulu-Natal Sport Awards hosted at the Greyville Racecourse on Friday night.

Ngema was born partially blind and lives with albinism, but this has not deterred him from pursuing his dreams.

“The award I received means more than just an award, it represents the hard work and dedication I have put in over the years, and also in it I see the sacrifices my parents made for me, and that is why I dedicate it to them,” Ngema said.

“My hope for the future is seeing more people getting involved in para-surfing and people with disabilities getting a chance to experience the love of the ocean and being able to shape their mindset and mentality.”

He will be representing South Africa at the 2021 ISA World Para-Surfing Championship from December 7 to 11 in the US.

The cricket fraternity also excelled at the awards, clinching three of the most sought-after awards. The Hollywoodbets Dolphins scooped the Team of the Year award, beating the newly reformed football club, AmaZulu.

The Dolphins had an outstanding cricket season in 2020/21, reaching three finals and winning two of them – including the four-day series championship. The KZN Cricket Union, which provides early cricket development in townships and rural areas, secured the Federation of the Year award.

The union has produced some of the most talented cricket players in the country, including Protea’s all-rounder Andile Phehlukwayo. A third award went to Dolphins player Keshav Maharaj, who was crowned as the Best Man in Sport in the province. Maharaj was not present to accept his award as he was representing South Africa at the T20 Cricket World Cup.

Other notable winners were netball legend Precious Mthembu, who received the Sport Personality of the Year award, while veteran broadcaster Vicky Masuku was honoured with a Lifetime Achievement award.

AmaZulu head coach Benni McCarthy won the Coach of the Year award. The category of Junior Athlete of the Year had a twist of its own when Olympian Matthew Sates and Saskia Hockly shared the spoils, the first time that had happened at the awards.

MEC for Sports Hlengiwe Mavimbela congratulated the athletes. “Sports practitioners had to return to the sporting fields without spectators, which must have been frustrating.

We want to recognise the successes of the sports industry personnel who have shown resilience and commitment, particularly in the Covid-19 environment.

“We would like to encourage and motivate those who excel in sport to plough back into their communities to help develop sports talent through programmes such as the KZN Sport Legends that is implemented by the department in partnership with the KwaZulu-Natal Sports Confederation,” Mavimbela said.